Do more with LeSS! 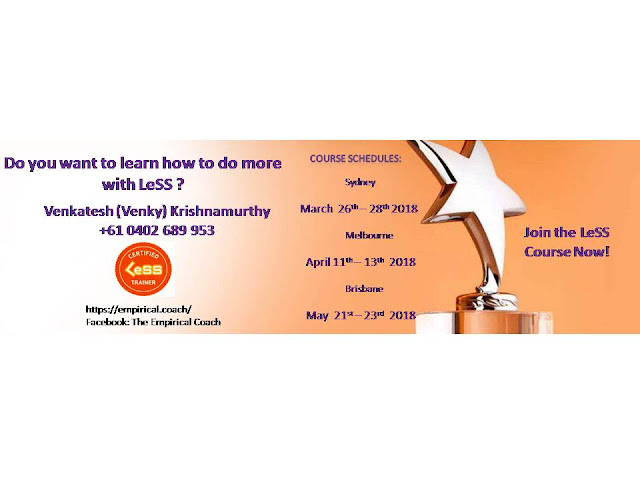 Join the LeSS Course now with the trainer Venkatesh (Venky) Krishnamurthy. Check the Course Schedules and click the link to register!

What is missing in the Agile world ? Thinking in models, LeSS

Our Agile practitioners are pretty good with Scrum ceremonies, Kanban, WIP limits, Cycle times and even building the self-organizing teams. However, I feel that the important thing that is lacking from the vocabulary of agilists is "modeling."
You might be questioning, What's modeling? Why is it so important?
Remember, we live in a complex world. Every conversation, actions and interactions are producing new behaviors and consequences impacting the system at large.
Modeling enables us to organise this complex information in a meaningful manner for further analysis, brainstorming, and forecasting.
One must also remember that models are as good as the data at hand. That's why it is said that,

"All models are wrong and some are useful".

There are researches which prove that people who model the system are better at making right choices and better decisions.
For example, consider a group which is keen to model the decision about hiring developers quickly(even though low skilled) to increase the feature velocity.
Teams and leaders who can model the idea before implementing it can see that, in the longer run, this decision of hiring low skilled developers could work against the intended goal of increasing the velocity.
As seen in the systems model below, the low skilled developers could end up creating more defects in the long run and thus reducing the feature velocity.

Modeling decisions, ideas, and observations will enable the team to make conscious choices rather than being driven based on instincts or past experiences.
Every day, the leaders, team members are making critical decisions without really modeling their impact on rest of the system. I feel that modeling skill is a crucial gap in the Agile world as of now.
This is one of the key reasons, why LeSS has embedded "Systems Thinking" as one of its principles and encouraged teams to Systems modeling during the retrospectives.
I spend quite a bit of effort teaching Systems modeling during my Certified LeSS Practitioner course. If you are keen to learn more about Large-Scale Scrum(LeSS) and modeling, you can register for my upcoming courses. The details about the Sydney, Melbourne and Brisbane courses are below:
Posted by Venkatesh Krishnamurthy at 12:52 AM No comments:

Today, I came across this article on Business Insider about Amazon introducing a new idea of spinning the wheel as part of managing their meeting scheduling chaos.
The spinning wheel seems to look like this

The first thing that came to mind while reading this article and looking at this wheel was OMG, the agile coaches, leaders from various organisations might copy this idea to manage their meetings.
My suggestion, please don't copy this practice.
As agilists say "Every practice is context dependent."  The above idea from Amazon, seems to have taken birth as a need to make their leaders come prepared irrespective of the presenter.
Unless your company has the same meeting related challenge as at Amazon, don't copy blindly.
Somehow in the agile world, it is a common practice to pick up ideas from popular publishing companies (HBR, BusinessInsider, InforQ, etc.) and implement the same.
I like experimentation, but copying because a popular company is doing it is a mere ignorance.
The most popular copied idea in the recent years has been the "Spotify model." The model, as far as I know, emerged as part of various experiments/ideas tried at Spotify.
Spotify has ingrained the culture of experimentation in their employees. I am not sure if they are still practicing the so called "Spotify model".
At one point, organisations copied the Google's 20% idea forcing employees to spend a day innovating. Even though Google abandoned this idea long back, it looks like it is still lingering around.
Many have attributed the innovations at Google to this 20% rule. However, according to Eric Schmidt, his plan was more towards changing the culture.
Posted by Venkatesh Krishnamurthy at 12:33 AM No comments: