The PDCA Cycle is a checklist of the four stages which you must go through to get from `problem-faced' to `problem solved'. The four stages are Plan-Do-Check-Act, and they are carried out in the cycle illustrated below. 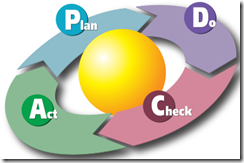 The concept of the PDCA Cycle was originally developed by Walter Shewhart, the pioneering statistician who developed statistical process control in the Bell Laboratories in the US during the 1930's. It is often referred to as `the Shewhart Cycle'. It was taken up and promoted very effectively from the 1950s on by the famous Quality Management authority, W. Edwards Deming, and is consequently known by many as `the Deming Wheel'.

Posted by Venkatesh Krishnamurthy at 7:29 PM