as part of Agile chronicles. 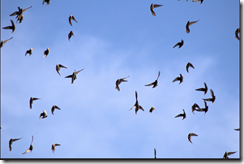 Some time back I noticed something odd with an agile team. Team temperature used to be 10 out of 10, and each team member expressed their happiness working on this project.  I was curious to find the secret behind an “always happy team.” A bit of interaction with the team and the ScrumMaster revealed some disturbing secrets.  Here are the key ones:

I thought to myself that this is not a self-organizing team, but a directionless team.

As Esther Derby points out, there are several myths and misconceptions about Self-Organizing teams.  I did cover a bit about these myths during my talk at Lean Agile Systems Thinking conference(LAST) in Melbourne, which is available on Youtube (toward the end at 1:03 minutes).

I understand it is not easy to build a self-organizing team, but there are principles enabling leaders in building such agile teams.

Read rest of the article on  : Agile Chronicles

Posted by Venkatesh Krishnamurthy at 2:14 AM